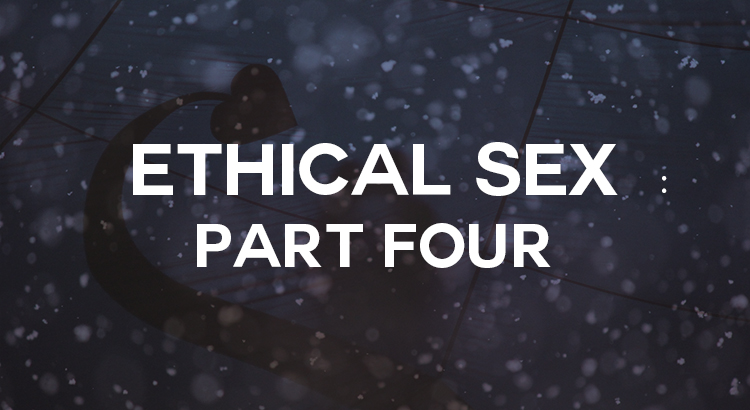 It never occurred to me to call what happened between us rape until about a year and a half later, when he texted me to ask, “Are you telling people that I raped you?”

I remember revulsed panic being replaced by a deep, trembling rage. What concerned him was not that he might have raped me, but that people might think he did. At the time I was too stunned to engage in a conversation on the nuances of sexual assault, but I don’t believe I should have had to. Though I often thought of that night and how it was one of the last we spent together, I had never thought about it in those terms. I refused to get drawn into a discussion, torn between a desire to yell at him and a need to end the conversation as soon as possible.

In retrospect it may not have even occurred to him to question his actions. It’s been said that we need to get rid of this idea that rape only occurs between strangers or on pain of death or bodily harm – that in order to qualify as victim one has to fight back and be overcome. An encounter between past lovers who fucked before and after does not have those hallmarks. He may not even have known of which night I was thinking, which is freshly lacerating in its own way. Still, his concern was for himself, not me, and that was nothing new.

I’m not sure exactly what we said – I deleted the text thread soon after. It makes analysis difficult, because my memory is no longer reliable after all we went through. I thought and spoke about him so much it’s possible some details changed in the re-telling. Certainly I’ve never been able to ask him for his side of the story. It was too hurtful while I was still trying to get over him, and now that so much distance has been achieved I don’t see the benefit in re-opening channels of communication.

I did not in fact accuse him of rape. A few weeks before he texted me I had tried to explain to mutual friends of ours “what happened”. How come we could no longer share a space. How come the last time I saw him I left in tears. How come I stopped calling, stopped coming over. It was part of a longer, more complicated story, but an important part.

I reminded them of a night spent talking and drinking in their sitting room, and how after dinner and whiskey and easy meandering conversation the attraction to him felt almost visible, as did anguish at our situation.

When I told them that after they left for bed and we were alone he had persisted despite my asking him not to, I had never really thought about what this meant. In the moment of re-telling, it was an instance quoted to prove that he did not pay attention to what I wanted from him and never really had.

Raw pain made me ask what sort of a person continued with sex despite tears. “If someone you were fucking started crying, wouldn’t you stop to ask if they were okay? Make sure they’re good? I mean who does that?” It was a question I’d ask more than once. As for how long I cried, or how hard, I can’t say – whether he even noticed it when he looked at me, whether he was too drunk to be concerned.

So I told them about refusal and then what followed. A year of coming home from the club to cry on the floor of my room, stifling hands over mouth (those tears I remember). Depression. Two weeks unable to leave my house, reading Helen Oyeyemi and starving until I had to go back to work. Suicidal ideation. An obsession with knives, hours spent imagining how I would do it, how I would kill him. There was no real conviction or intent, but how those ideas gave me comfort. That life can be disrupted I already knew, but it was comforting to think that the possibility of me disrupting life was real.

(When you see how easily and simply a life can change, even through inaction, you realise that every aspect of how we live our lives was invented by someone, and the texture of the sky changes. You respect nature more, and learn to remember that nobody really knows anything, that someone had to invent the word for everything.)

In the days that followed that text conversation, as I revisited that night and my narration of it, I realised it did sound like rape.

So then I had to ask myself, fuck, was I raped?

Despite all the time spent on and offline with the thoughts of smarter people it had never occurred to me. Obviously a boundary had been crossed, but none of the sex we’d had before that night had ever been straightforward. Drunk sometimes, or sober, always fun. Sometimes loud and sometimes biting down on shoulders to keep silent. Often as an act of infidelity for him, indiscretions in two different relationships and the rebound time in between. It was a constant that I badly wanted to have sex with him – though not like that, on that night. Not as a misstep or convenience or after-thought. This was what was already between us on a night where I can’t be sure of much. We had shared the same bottle of detail-blurring whisky. Months later we were still able to share moments of non-sexual intimacy, singing along to the same songs and going halfsies on mzingas. I wrote memories of him that moved the people on my Tumblr. We had sex the very next day, even, and in the evening, after agreeing that we just shouldn’t hang out any more, he dropped me at the Modern Coast bus station on Mombasa Road for the 9.30 bus.

I liked him a lot more than he did me, a fact already acknowledged between us. Because of this, because I had already caught feelings, I had asked him to stop asking, to stop touching me, because Lord how I loved to have him touch me. It wasn’t the sex itself I didn’t want, it was the inevitable heartbreak it would bring. That was what I was asking him to keep from me, and that was what he ignored, and should have cared about enough about to stop. I wanted him to stop, for my sake and his.

So was I raped? Certainly I was hurt. I had sex I didn’t want with someone I wanted, who didn’t want me. Our mutual friend – a man whose intelligence and spirit we both respect – must have called it rape, when he called him out, or else why text so. But I didn’t want to have to know I was raped. It did not make me calmer to think that I was, acceptance as the first step to healing. Healing, if such a thing exists, came through other ways. It was easier to talk about it as part of a larger falling out, or to say I stopped being where he was because I liked him too much, which is kind of part of what happened anyway.

It unsettled me that the details I laid out could in fact be put together in the shape of assault. To say he raped me (who I wanted so long, in whom even at this distance I can see the shape of a life we could both have loved) to have this conversation would put us all in a position where we have to decide. How do we choose who and what matters more to us? Fathers of daughters and husbands of wives, friends of old with the bonds of time and experience – how does this incident fit? It still doesn’t sit easy. So they apologise for my pain, and they wait.

It is so hard to make the word rape liveable. We use it easily as a shorthand for violence – strewn liberally in male poetry and Game of Thrones realism and short punchy tweets about countries that are taken advantage of. It is understood as code for shocking violence, human cruelty beyond all accepted norms, or else as a quick way to describe how badly the other team lost. How then to fit it in amongst people who are still friends with the same people and laugh at the same tweets? After using it as a punchline, how does it then apply to those strangers who were in fact threatened with death? And then again the same word for those who know exactly what was done to them. How to use it in a way that makes sense?

Unable to speak in any other terms, in the absence of violence and with only our soreness the next morning or the tiniest of blood spots on the tissue as mementos, sometimes we say it was a bad night, just bad sex. Chalk it up to experience and say it doesn’t really count. It happens to everyone. How much of what we call bad sex consists of violation?

The ubiquity of a thing demands multiple descriptions. It may be that we need broader vocabulary: a thousand words for each of the ways our bodies are taken from us.

The exact number of words the Inuit people have for snow is a matter of debate, mostly because the phrase became a cliche and people are pedantic. There’s two interesting little articles about this from Washington Post and BuzzFeed. They pretty much recap the debate, although neither quotes any actual Inuit people,oddly enough. I claimed a thousand word count because I like how it sounds, and I am invoking the snowclone trope, if you’ll forgive me for it.

While the extent of vocabulary does not determine one’s cognitive abilities or reflect intelligence (shoutout to cramming the longest words possible into primary school compositions), it is obvious that it eases communication. Other mediums engage other senses, but words are handiest.

One of the snow debates fusses over whether the words used are distinct from each other or merely a piling upon of multiple suffixes onto one base word, and if so, should they really count. Whatever the case , “piegnartoq” for “the snow [that is] good for driving sled” is better than just “snow” as far as instructiveness is concerned.

Old words die as their people move beyond needing them, and whole worlds die with them. In the new worlds that follow, birthed by our endless capacity for invention, words take shape as they always have: through acclamation. So we work it out through slang and academia, analogies about cups of tea and posts advising against making children hug people they don’t want to: a milieu from which we’ll create a teachable scale of violence that’ll be passed around, memeable and therefore inescapable. Words that will tell exactly what was hurt, and so what must be mended.

So keep talking, and forwarding, and sharing, and comment below. Moderators may intervene.