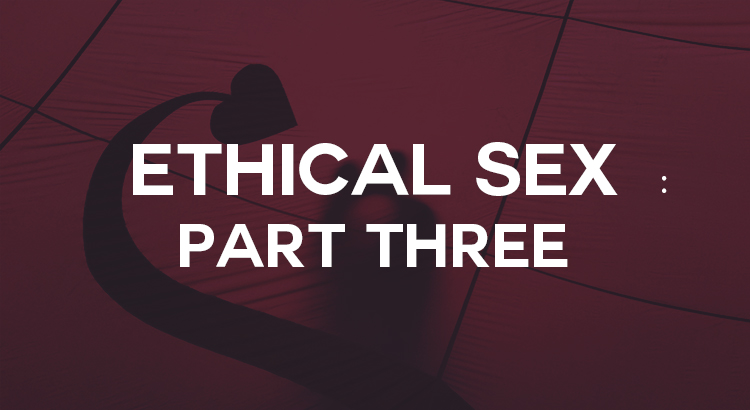 Consent can be a complicated topic. Even to me, that sounds like a controversial statement, but it is complicated, and that should inform how we approach it.

When the conversation of consent went mainstream, it was initially very binary. It did not always aim for nuance. Don’t get me wrong, this is not a criticism, it was a necessary measure at the time. When an idea like “no means no” was widely controversial and incited debate among large swathes of the population, where else would you start but the bare bones basics? The conversation has grown since then, and it’s echoes are being felt in institutions around the world. Even so, I feel like the full potential of this discussion has not been realized. The conversation is still largely one of condemnation, or to put it another way, centred around the clearer boundaries of consent. This is important, but it is not the only subject.

I want to address the difficult questions about consent that we don’t normally ask. You may have thought of them, but felt inclined to say nothing. Part of this hesitation no doubt comes from how a number of the conversations are framed; that there are no questions to be asked, that you should already innately know these things. But I think the larger part is a fear of the answer. The fear that asking that question will lead to a conclusion that you would rather not be true. Or if it is, you might prefer not to know. It might say something about you, or it might shine a new light on someone else. Either way, sometimes it seems easier to just stick to what is already clear. What is already known.

Unfortunately, while the big, clear cut categories might be safer ground, they are only part of the story. For those of us who consider consent important, which should be all of us, we would like to have ethical sex lives. And for us to do that, it requires a deeper inspection of consent. We have to delve into areas that may make us uncomfortable because of our past conduct. We have to take a look at behaviour from people close to us that is simpler to just leave alone. We need to go to where it is complicated and messy and through our combined effort, find answers. Perhaps these conversations are going on somewhere, but we need them out front — where everyone can learn.

For a while now, I have been asking people who speak on this subject a question. When both parties are drunk, what are the dynamics of consent? The most common reaction is a hesitation and usually, there is no answer. That seems like a pretty big gap in the conversation because for many people, that is not a hypothetical scenario. Drunk sex is incredibly common. Odds are, you’ve had it. Is this a question you’ve asked yourself? Do you have an answer? I know I don’t have a clear one. And I think, if we are to have ethical sex, it is a question we should be asking and trying to answer.

Can a drunk person give consent? For most people, this is an easy question when only one party is drunk. But when both are intoxicated, there’s a lot less debate or, really, any kind of conversation. What are the rules and boundaries here? What accountability can there even be? With the memory loss and impaired judgement that some experience, is this an environment that ethical sex can even occur in? I’m going to go out on a limb and say, probably not.

Of course, many of us have had drunk sex in numerous circumstances where all the parties involved enjoyed it, where it was consensual. The problem here, is the doubt. The uncertainty of whether knowing consent was given or not.

Drunk sex offers a good entry point into this kind of conversation because it highlights the kind of situation where there is no clear villain. Where it’s not really that simple, or if it is, it certainly doesn’t feel that way. How many people prefer to drink for a confidence boost, for lowered inhibitions, for that adventurous push that make social interactions easier? How much of the prevailing sexual culture is learned and practised around such interactions?  How many people just enjoy drunk sex in and of itself?

I don’t think I have dug enough into this topic to unequivocally say that drunk sex is always wrong. What I can say is that it certainly is not the easier option it is often portrayed to be. It is dangerous. It opens doors of where consent is blurred. It might not have been given, it might be given and forgotten, it might be given and remembered but compromised because it would never have been done sober. It creates an environment where you may violate a person’s boundaries and more than that, leave them feeling that they were the ones at fault. In the end, it comes down to one simple question. Is the risk that your partner(s) is not actually consenting ever worth taking?

At a minimum, it requires more introspection, more communication between parties and more boundaries set when sober than it gets now. If you are going to engage in drunk sex, it is imperative to know beforehand how to hold yourself accountable and how to ensure you are always within your partner’s boundaries.

But having ethical sex is not entirely based on your own attitudes because sex is not an individual activity. It is important to know what views other people bring and how they affect your sexual relationship.

The other day, I was among a group of men talking about how to avoid having sex with a woman. I’ve listened and been part of these discussions often, I’ve just never given them the level of inspection they deserved. There was a dynamic of sex that I had never truly questioned and so some things that should have never set off alarms in my mind.

The entire premise of the discussion was that when a woman initiates a sexual encounter, she is unlikely to take no for an answer. A question that seemed to resonate with almost everyone was what to do when you turned her down, and she said “what’s wrong, don’t you find me attractive?” Another was how to proceed after you said no, and she refused to accept it (“I know you want to”) and went straight for your pants. The offered solutions were “you just have to physically run away” which was met with the kind of laughs that said, I find that funny but only because of how true it is. The other was, “sometimes you just have to go along with it, what else can you do?”

We saw the matter of women and consent dealt with last week and so I won’t go into again. What is important here is the attitude many men carry about how to handle this. It is a common misconception that men should always be ready for sex, that they can’t and don’t say no. Many women receive a “no” with hurt or anger or as a challenge. As a result, it is often easier to just accept and “go along with it”. When you, as a woman, receive consent, it might be important to be sure that it is actual consent, not resignation. Not damage control.

I have read about and heard from women who have sex when they do not want to. They are not forced, there is no coercion, but prevailing attitudes say that this is what is supposed to happen especially in relationships. Verbal consent is given, sometimes with the performance of enthusiasm, and all the apparent forms are observed. Still, there is something wrong with that. Something unhealthy about someone having sex with you because they believe they would be a bad girlfriend, or a bad partner if they did not.

In these cases, it is not your fault, but that is not the same thing as saying you are completely free of responsibility. And what is your responsibility? There’s no easy answer to that. Sexual relationships are varied and how you interact, and what you are willing to share, is not a constant. People bring a lot of thoughts and beliefs with them, some completely uninspected, and it is not always possible to dig into that. What you can always do, is make sure that your partners understand that it is okay and consequenceless to say no. That they can always change their minds. That what they want is important.

And so, while consent can be a complicated topic, the answers are what they’ve always been — you only have to think about them deeper. Receive consent, yes, but with what society is, that is not always just a simple yes or a seemingly enthusiastic response. Communicate, yes, but the depth and breadth of that communication must encompass a wider range. Consent is not a matter of limiting your liability, it is about engaging ethically and honestly with someone else. The effort must extend beyond your needs and wants and what is easy.